4.0 Stars – Definitely a little snooty but has a trendy atmosphere and bomb ass duck fat fries

3.0 Stars – Actual food is nothing to ride home about but the dessert menu is super creative

After being away from each other for a week, sexting, and sending adorable ass text messages— 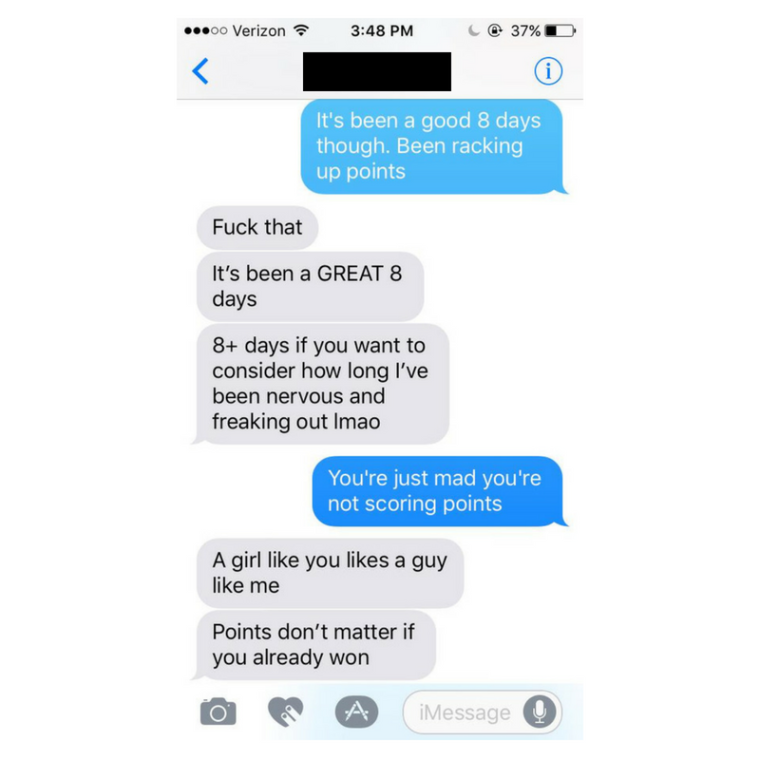 This was it. This was our weekend to fuck. I had shaved. Cute underwear was on. Condoms were packed. It was game time.

That said, there may have been a kink in the plan. I was going over Thursday night and my period was supposed to start at literally any moment that day. I did the right thing and let him know what was going on and he, per usual, was adorable AF.

I knew there was a chance but I was determined to beat it. I flooded my system with Advil, chugged water, and read every Wikihow on how to stop a period. I was ready.

Thursday night we went to a Greek spot for dinner and once again pissed the shit out of the waitstaff because we wouldn’t shut the fuck up. I had also asked him if he would come away with me to Ocean City, MD the following week. Plans with a friend fell through and I still had the room booked. He agreed.

When we got home, it was on. Thing was we both really wanted to go above and beyond for the other person so things didn’t quite work as well as we wanted. But, it would all be fine because I was going to fuck him while he was on a conference call for work the next morning to make up for it.

Friday morning I woke up with the pain. That pain every woman knows all too well. I ran into the bathroom and it was true. I had gotten my period. BAD. Like murder scene. I went into my bag. Among the two vibrators, spare bra, Soft Discs, and umbrella—all I had was one tampon. ONE. Shit.

Before the panic truly set in, we made breakfast. Jared had no idea what I liked to eat so he picked up a bunch of stuff the day before. He even got chocolate chips for pancakes since he thought I’d want them if I was on my period. We spent the day snuggled up on the couch and I watched Netflix while he did actual work.

Around dinner time it started to hit just how poorly I packed. One tampon was not going to last me until Sunday and I needed to save the Soft Discs for sex. We were going out anyways to pick up some things for dinner and there was a CVS next to the Trader Joe’s. Perfect. Should be fine.

As we walked through Trader Joe’s I felt my thighs sort of stick together. I attributed it to the humidity. Then I squatted down to grab a spice bottle and THERE SHE BLOWS. I felt the splooge of blood and began to panic since time was limited. I tried playing it cool when we got to CVS but as I got out of the car I pulled my skirt up a tad and saw the damage. There was a full Rorschach painting of blood happening down my thighs.

Despite this disaster, Jared was cool with it. He said he was just happy to spend time with me. We cooked dinner together and danced around his kitchen. While he was cleaning up, I went back into the kitchen and laid on the floor with my legs on the wall to stretch my hamstrings. He joined me on the floor and we just laid there, enjoying each other’s company.

We both wanted to fuck and after working out some mechanics it was decided that I would attempt the Soft Disc and we’d hit the shower. Things went better this time. We got our heads out of our asses and just had a fun time. His shower was pretty big which definitely made things easier. Shower sex is a tough one to make work but there were plenty of ledges and enough wall space to get it done. (I also may have farted upon exiting the shower. All mystery was lost.)

Saturday morning we cracked into the chocolate chips and made some pancakes before cuddling up and watching the original Jurassic Park. Pretty much we spent the day curled up on the couch and eventually decided it would be a good idea to see the outside world.

As I was doing my make up, Jared came into the bedroom and put a glass of white wine next to me. Then, as I was finishing up he started putting music on that he knew I liked. I have a weird love of John Denver and as it turns out, he is also a fan. He put Country Roads on and we slow danced in his living room.

After our dance break involving me teaching him the Beat It dance, we headed out to the bar. A few glasses of wine in he says,

“You know I’ve been seeing this girl and she asked me to go to Ocean City with her. Like it’s her favorite place in the world. What does this all mean?”

“It means whatever you want it to mean. I think she just wants to spend time with you and enjoy things as they come. She may also want it to be exclusive but isn’t ready to label anything.”

“Exclusive? I could do that. I just got out of a relationship and I’m not ready to jump into anything.”

That was it. We spent the rest of the night walking around downtown Montclair, trying ice cream, laughing, and opening up to each other.

Somehow the time flew and it was already Sunday. We ordered in breakfast and finished watching Jurassic Park. At one point a pillow fell off the couch and knocked over a glass of water. We cleaned it up and while we were on the floor started making out and made moves to fuck.

Jared knew his way around. I went into the bathroom to pop in the Soft Disc and when I got into his room there were ties, cuffs, and vibrators out. LETS. GO.

After fucking for about 2 hours, we went out to the park and got some snacks before I drove back home. I knew I was going to see him 4 days later but, I didn’t want to leave. I was so happy. It had been a long time since I felt like I was a part of something mutual. There was no grey area on if we were interested in each other seriously or not and that was so relieving.

With that, we got ready for a (period-free) beach weekend.