Context: I don’t know what it is but, every man ever on dating apps mention Larry David. ALL OF THEM. And every single one thinks he’s the first to have come up with it. 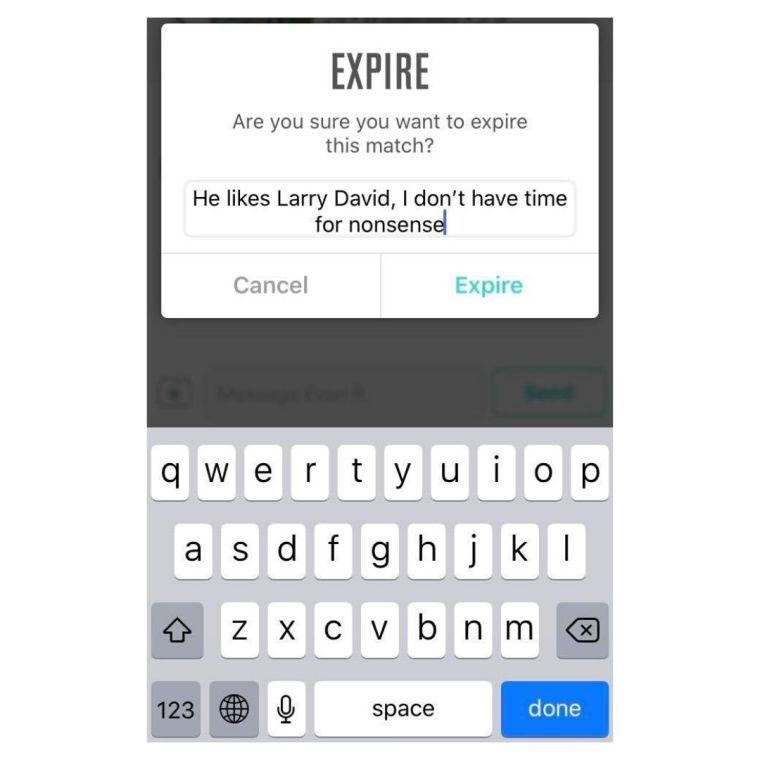 One night when I was swiping away on Tinder, I came across Ben. He was that douchey kind of hot but he was from the Boston area so we immediately clicked. In just a few messages we went from chatting on Tinder to texting.

He asked to meet up over the weekend but I was traveling for the holiday. That’s when he asked if I was feeling spontaneous and would want to meet that night. I had nothing to lose. I asked if he was fine with meeting at the bar closest to my train and he said yes.

We had established that I’d let him know when I got on the train. I texted him when I found my seat. When I got above ground and had service, I noticed he didn’t text back. Weird? Oh, well. Maybe he was also underground and didn’t have service.

I texted him when I got to the bar and didn’t hear anything again. 5 minutes passed. 7. 10. 12. Asshole wasn’t coming. I texted him again saying, “Hey, so it looks like we missed each other. I’m going to head back home to NJ”.

Immediately he called me. Allegedly he was on his way in a cab, got stuck in traffic, and would be there in 10. I figured I was already there so I may as well wait 10 more minutes so I ordered a beer.

10 more minutes passed and he texted me that he was at a train station and he’d be there in 10. Wtf? This doesn’t make sense. If you were in a cab, why are you now at a train?

20 minutes later, this fucker shows up. He apologized and doubled down on the traffic excuse. We got to talking and it became more and more clear. This fucker was high on coke.

He was so hyped out and was clearly not in the same mental state as I was. Well, that’s a no from me. Then, he dropped the fucking n-word in conversation. NOPE. We’re done here.

I said I had to go home and he offered to walk me to the train. There wasn’t anywhere to walk me since it was 20 feet from my stop so we had the awkward hug. He went in for the kiss and I swerved hard so it nicked my cheek. He insisted that we do this again…I was good. Blocked. Unmatched. 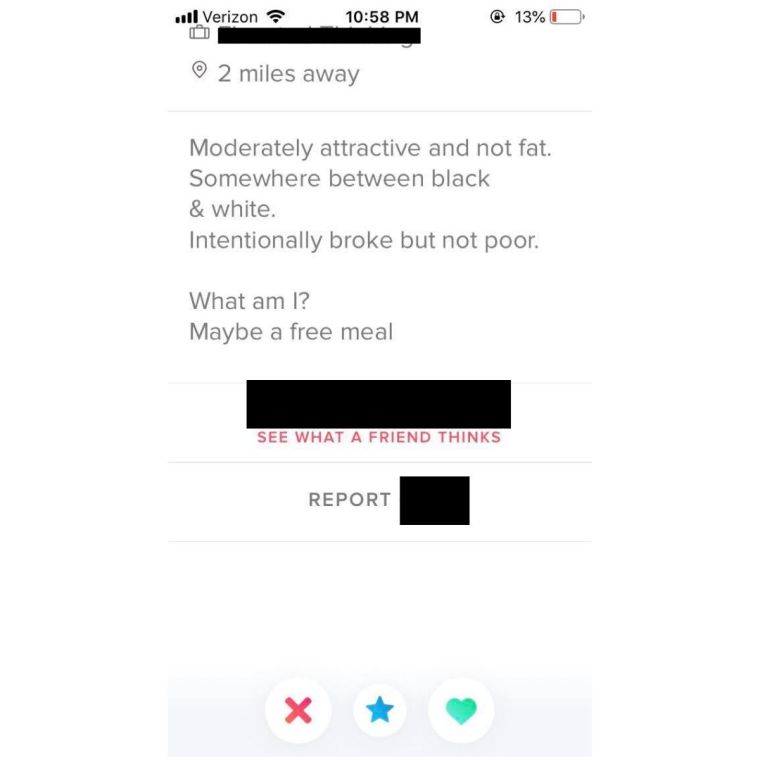 I had been talking to Nathan on and off for a bit and I wanted to fuck his brains out. Physically, he was exactly what I look for. Tall, dark features, broad ass shoulders, 30-ish. The whole thing.

I wanted to meet as soon as possible so I asked him out. He lived in Hoboken which was another selling point for him. I’m a sucker for sheer convenience. He suggested the bar and we got to work.

I showed up and he already had a beer waiting for me. Holy shit. This is why you date 30-year olds. So classy! Conversation was super easy. He was Italian and from New Jersey so we covered a lot of ground on family. We bonded pretty quickly since he went to the Jesuit university down the road from where I went to college so we talked a lot about Baltimore and the bars we used to go to.  He was New Jersey through and through and made some comment about never wanting to leave…interesting.

He seemed to be my brand of weird. We joked the same way (although my comments are filled with a fuck ton more curse words) and would make so many side comments. Truthfully, I was enjoying the shit out of my time.

It appeared he was too. He kept getting more drinks and we had about 3 beers each. But then something happened. I don’t know if I said something or we just weren’t a match but, he said he was going “to go home and watch a movie or something” so he called it short. Weird. Maybe he really was tired?

However when we walked out he hugged me, said it was great meeting me, and then walked the other direction. No kiss. No walking me to the train. Nothing.

What made it weirder was that he texted me the next night saying he had fun and thanked me for a movie recommendation. I said I had fun too. No response. 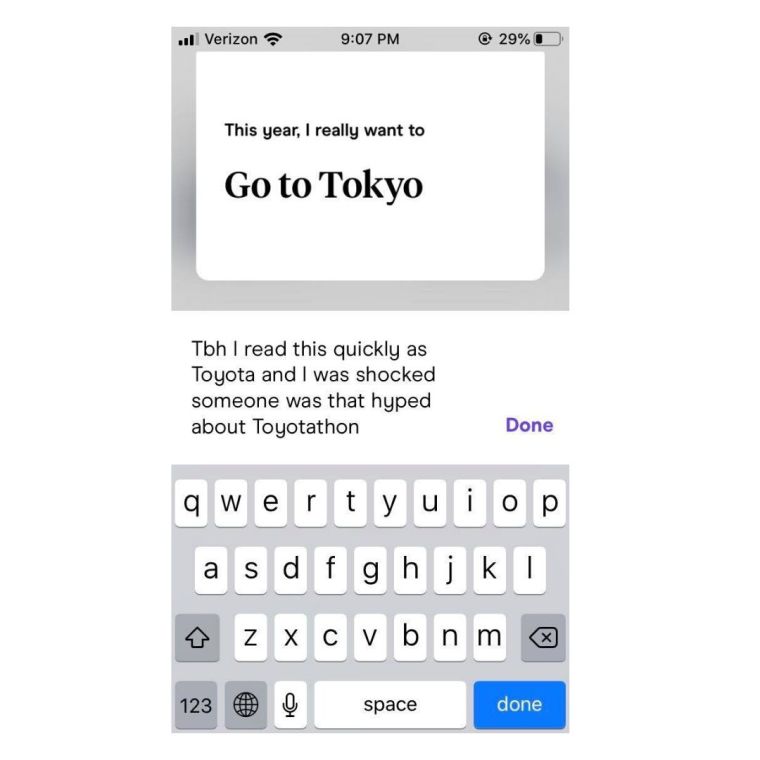 Location Review:  3.5 Stars – The bar itself is fine. Very millennial with brick walls, string lights, and craft cocktails. Really just like it because it’s close to my apartment.

I met Shore Store months prior at the Jersey Shore. My friend and I wanted to go to Seaside Heights and since my then boyfriend’s family lived near there, he agreed to drop us off while he helped his family with some stuff.

Kaitlin* and I went to Aztec to live out our fist pumping dreams and that’s when we met Shore Store. He bartended there on the weekends and since it was weirdly quiet on the beach that day, the three of us talked quite a bit. He was cute and it turned out he lived only one city over from Kaitlin and I. Since I was not on the market, I pushed Kaitlin to get his number. He was young but he owned a Tesla, was an engineer, and had his shit together. Solid play thing.

Months passed, I was newly single, and Kaitlin was drunk. During her wine stupor, she texted him and let him know that I was available, he should shoot his shot, and passed along my number.

Next thing I knew, I had a text from Shore Store. We texted back and forth but it never really amounted to anything. A few weeks later, he called to let me know he was going to be in Jersey City that night and asked if I wanted to meet up. Fuck it. I agreed on the condition we go to the bar closest to my place, I wouldn’t be wearing make up, and my hair wouldn’t be done. Shore Store agreed.

He picked me up in his Tesla which was pretty cool. The navigation screen was the size of an iPad so that was interesting but the car itself was nice. When we originally met at the shore, he was behind the bar and I was sitting. I didn’t realize until he got out of the car just how short and petite he was. I could bench him. Good face though.

We found a spot and got to drinking. He was a funny guy and for whatever reason, enjoyed my jokes. He was definitely young though. We talked about the day we met and he asked about where my ex went to high school. Turns out they went to the same one…only 5 years apart. Shore Store told Kaitlin and I that he was 24 over the summer. Lil baby was 22.

The more he spoke the more I noticed our age difference. The way he described his sexual exploits just made him seem younger and younger. Then he said that he goes for older women…like myself. I’m 26. Not 46. Chill bro.

Aside from him being a child, we still got along. He drove me back to my apartment and somehow it came out that I write this trash. He really wanted to make the blog so we kissed in the car…he made out like a 22 year old. Too soft, small tongue, and non-threatening. I like some risk in my hook ups.

He talked his way into coming up to my apartment so we threw some comedy special on Netflix while sitting on my bed. I don’t know how it happened, but we made out again and next thing I knew he was on top of me messing with my tits. The whole thing was weird and to top it off, he had a broken rib so even if I wanted to fuck I would have snapped that child in half.

After the most awkward hook up in history, I changed into comfy clothes and asked him if he planned on staying over because I had to go to bed. I was banking on him leaving. After all, we weren’t going to fuck and I basically just put the pressure on. HE FUCKING STAYED. Ugh.

Since I didn’t want to be touched and he wanted to spoon despite his broken ass rib, we had the worst cuddle session in history. The next morning, I had him scoot out before my roommate got up and he texted me some pic of him stuck at a railroad crossing.

I didn’t think I’d hear from him again and for months I didn’t. There was a shooting in my neighborhood and he reached out to see if I was okay. A few more days passed and he asked me if I wanted to go to a comedy club but I was already out. Then he reached out around Christmas…twice. And then he responded to my IG story (that was really posted to show my fuck buddy that I was back in town) and tried to slide in on Kaitlin and I’s plans one night. BRUH. Back to the friend zone you go.

Both of us had partied the night before so we decided to hang out together at home. However, I woke up that morning with my period. God damn it. Since he was coming over, I expected sex to happen and thought it would be polite to give him a heads up. 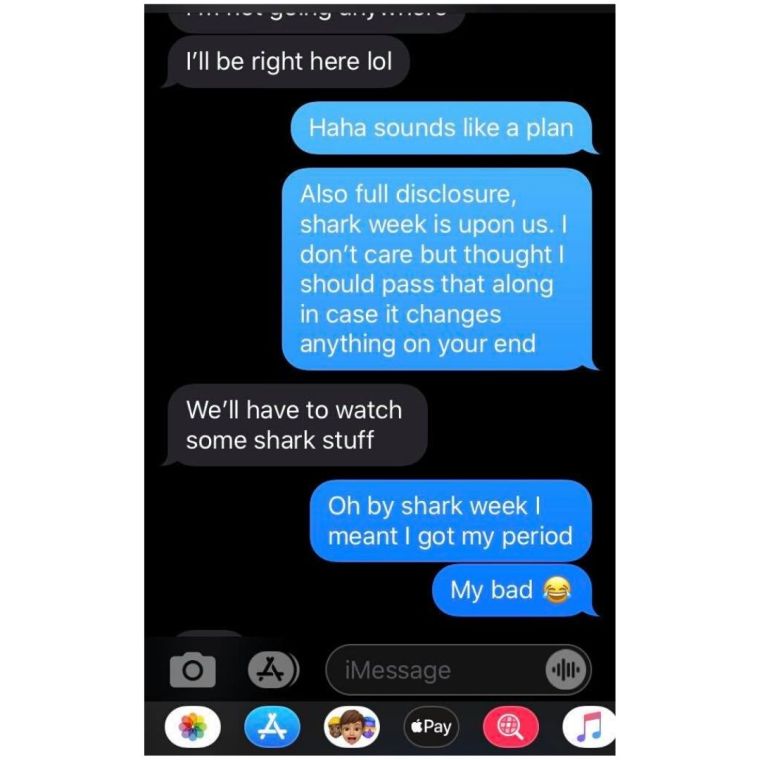 Chase offered to bring food if I supplied booze. I was expecting a small thing to share. Oh no. He brought a TRAY of lobster paella, these tasty ass Portuguese pudding things, cookies, and Portuguese candy that tasted like Reese’s Stix. Holy. Shit. Wow.

We had a nice chat over dinner where I found out he was previously married and going through a divorce. That sounds bad but really, it was a good talk. He was candid with me and they had good reason to end it. When your wife cheats on you and tells you you’re a piece of shit, there’s a good case to be made.

He was such a confident and strong person that I loved having sex with him. For the first time in months, I didn’t have to think. He took control while I got to be in the moment. We fucked again in the morning before he went home and it was solidified. We were fuck buddies.