Location Review:  4.0 Stars – Cool date spot. The decor makes it feel a little sexy with the velvet wallpaper, happy hour is good, beautiful rooftop, and has a gay bar attached.

4.0 Stars – This is a basic ass bar. Nothing crazy. BUT their drinks are dirt cheap.

I had just started using apps again and was being super passive about it. So, I started playing a game on dating apps called, “How Hot Can I Bag” where I would just swipe without reviewing further if I thought the guy was cute. Shitty bio? Fuck it, I’m using you for sex so does it really matter that you watch The Office?

Chase was one of the first winners. His bio was straight shit, clearly copy and pasted from some bullshit website. 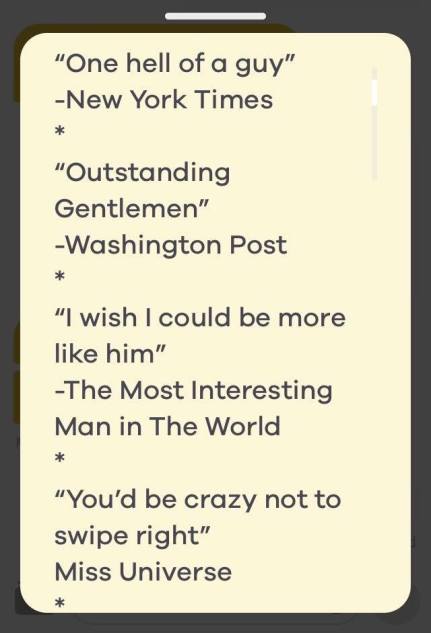 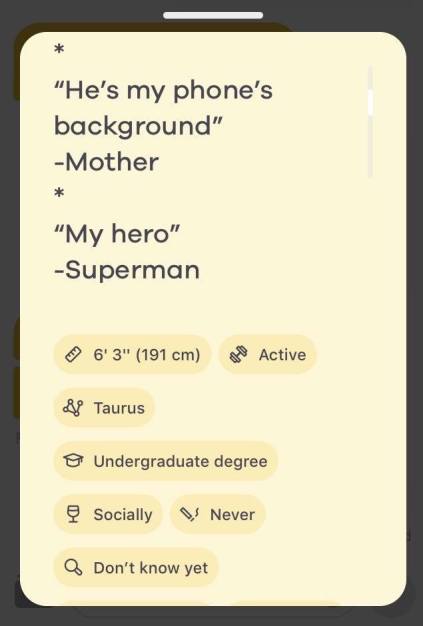 Come on. We’re better than that. But, he responded to my weird ass gif pretty quickly and asked me out. Boom. ITS GAME TIME BABY.

He was going to school for a financial certificate but since his program was in Stamford, we were a bit limited on when we could meet up. The only night that worked for both of us was the Tuesday I was getting my Nexplanon implant replaced after work.

This wouldn’t normally be a big deal for most. After all, it’s an outpatient procedure that takes all of 15 minutes. However, I pass out. A lot. When I got the implant put in 3 years ago, I fainted later that day while I was driving since I freaked myself out. Although I wouldn’t be driving, there was a strong chance I would pass out in front of a strange male at a bar. FUCK IT.

I got the procedure done and that shit was rough. I expected a small incision, easily pulling it out, and shooting the new one in. Oh no, they had to squeeze and push it through the incision to get it out. This triggered my fainting REAL QUICK. By some act of God, I managed to stay conscious even though my vision went black for a sec.

So while I walked to the train to head to the bar, I freaked the fuck out. I still felt weird from the procedure and broke into cold sweats. Then I started freaking out because I was about to go out with a boy. This entirely new chapter of my life was about to start in a matter of 20 minutes. Holy. Shit.

I beat him to the bar, got a glass of wine, and gave myself a pep talk. This was happening. I was there. There was no turning back. If it was bad, I could leave and would be home in 15 minutes. I got this.

Chase came in and he was more attractive than his photos. Hot damn. He was from Brazil so we talked a lot about his family, how he settled in New Jersey, and where the best Brazilian food in the area was. We joked about how this was really for him to get a green card and he joked that we could even get married in New Hampshire. DEAD.

I don’t remember much about our conversation but, he was definitely hot. I remember having that moment where we locked eyes and felt the sexual tension in the air. At one point I felt his knee touch mine so I pressed mine a little bit into his to see if it was an accident or not. He didn’t move. It felt like the hottest moment of an 1800’s love story.

We decided to switch bars and while I was in the bathroom he moved everything we ordered to his tab and paid. My bar for standards was on the floor at this point so I was completely shook.

I made a wrong turn when walking to the next bar. As I pulled my phone out to get directions he kissed me and it was perfect. Honestly, probably the best kiss I had to date. His lips were so soft and he knew the exact amount of tongue to use in that moment and where to put his hands. So we ended up making out…a lot. I ran my hands down his back and it was clear that he was in great shape. Also, even his arms were super fucking soft! This motherfucker had to be soaking in cocoa butter or some shit.

We made it to the second bar and he let me cover the first round. We sat in one of the booths and the sexual tension continued. We were holding hands, playing with each others’ fingers with our legs intertwined. Probably every 15/20 minutes we’d have a quick make out.

Eventually it was time to head out. After all, it was a Tuesday for godsake. I went to make the turn for the train but he insisted on driving me home. I was convinced I would die but YOLO. I survived the Nexplanon, I could survive the trip home.

We made out a lot in his car on arrival and he was doing his best to get the invite upstairs. But he wasn’t asking like any other guy had before. Instead of saying, “let’s take this upstairs”, he said, “I want to explore your body and kiss you all over.” UHM K. HAI. Normally I wouldn’t go for this line but it does have some power when it comes with a Portuguese accent from a hottie.

Despite getting intensely turned on, I wasn’t ready to fuck just yet. This was my first date since everything happened. I needed to chill a bit. So, I offered for him to walk me to my apartment. As soon as we got to the door, we made out extremely heavily and this went on for at least 10 minutes until I finally realized what time it was. I sent Chase on his way and went up to my apartment.

I did it. I got a bit of my groove back.