Location Review: 4.0 Stars – Cool spot, especially would be awesome in the summer. There’s a patio with tons of benches and the playlist is fire. That being said, if they put some outdoor heaters out they could get decent business in the winter.

Truth be told, at this point in time I was starting to be done with the whole dating thing. I had gone on several first dates, had plenty of awkward situations, and was swiping away with no luck. There are only so many times I can match with a guy, meet him, and he looks nothing like his pictures.

One night, I was swiping through and I saw a decently attractive guy. Definitely not my type and he looked like he’d be a toss up on if he looked better/worse in person. Fuck it. My strategies hadn’t been working. Let’s swipe right and see. We matched pretty quickly and started talking.

His opener was pretty solid, he was from Massachusetts, played music in his free time, had done work for non-profits, and seemed chill so we moved to texting. (Fucker had read receipts on. Fantastic).

While we were texting, I was also texting a friend from home. We were talking about Tinder and how to respond to the following gif:

I then took it upon myself to try it out on an especially attractive guy on Tinder. It worked IMMEDIATELY. I went to tell her my success story and I done fucked up by texting Pete instead. 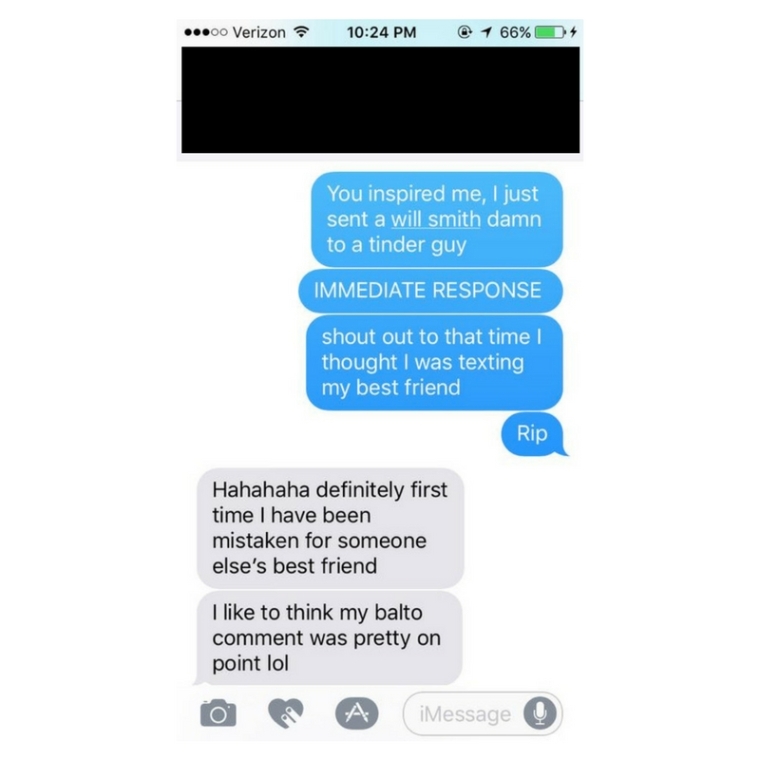 HOW. After such a royal fuck up this guy wanted to go out with me? Either he would be everything I wanted or was bat shit crazy.

I rolled up to the bar and was pleasantly surprised that he was more attractive than his pictures. Shorter, but definitely cute. Hot damn.

Since everyone and their mother went out for post-holiday party drinks we moved to the patio outside. We were both from New England, could dress appropriately for the weather, it was fine.

We clicked pretty quickly. We went over the usual first date things, made each other laugh, talked mad shit to some Steelers fans, the whole thing. As we talked, we kept moving closer to each other on the bench. Pretty soon he was holding my hand, had an arm around me, and I had my leg on top of his.

He was telling me about how he loved music so much but could never teach and then out of nowhere went in for the kiss. BALLSY. I didn’t object so we made out a little. Then we stopped. He asked me a question and I had no idea what he was talking about since the make out was so solid. So we just made out harder.

He asked if I would come back to his place. I had to be at the bus station at 3 am later that night so I declined. He then offered to come to Jersey. FUCKKKK THIS NEVER HAPPENS. I wanted to say yes. I really did. But I also knew that my room was a disaster (mostly that my childhood stuffed animal was on top of my pillow and there was no way I’d be able to move it quickly and secretly). I instead went with, “Listen, I want to but I’m just not a first date fuck and I have a lot to do before I head out. Second date though. I can be swayed”. …so we made out more aggressively.

Between make out sessions it was made pretty clear that Pete was not over his ex and was kind of a player. They had broken up 3 months prior and he made a comment along the lines of, “I just found out she was dating so I figured it was time for me to start dating and try to get over her”. Very healthy. He didn’t tell me what happened between them, just that they did some shitty things. He also told me that he had talked to her earlier that day, still loved her, and they were about 18 months out from getting married at the time of the break up. WOWEE WOW WOW. He also brought up that before he was with his ex he dated every girl ever and recently had 3 dates with this other girl in NYC. I mean I’m not one to talk but, some things don’t have to be shared on the first date.

Despite this, I was into him. I apparently made him nervous because I was “so attractive, down to earth, and chill”. Plus I went down as his best first date/Bumble date ever. He clearly had some shit to work out (the guy pre-gamed the date since he was so nervous) but he was throwing himself at me. In addition to constantly kissing me, within 10 minutes he made some comment about how if this went well and I played it right there may be a Patriots play-off ticket in my future. DONT MIND IF I DO. Also, it had been awhile since your girl got down. She deserved a good fuck.

We got pretty aggressive with the make outs to the point he was laying on top of me and was working his way to more. But I could have sworn I heard a door click. He asked what was wrong and I told him that I was pretty sure someone was there. Pete brushed it off and we got back to business. And then we heard a, “Hey! You guys gotta stop. Management doesn’t like that. You gotta go. You shouldn’t even be out here!” Well that ended the date pretty quick.

He held my hand and walked me back to my train station. We kissed and I went on my way (and had the worst NYC commute of my life later that night). As this was right before Christmas break, we couldn’t meet up again that week. But, we texted the whole time in anticipation of date #2.